Other causes of high sodium

The most common cause is the destruction of the neurohypophysis
It can derive from:
• Trauma
• Neurosurgery
• Granulomatous disease
• Neoplasms
• Vascular accidents
• Infections

Insipid diabetes is in many cases idiopathic; occasionally it can be hereditary. The family form inherited with an autosomal dominant mode. It has been attributed to mutations in the pro-pressophisin gene (AVP precursor). Nephrogenic diabetes insipidus can be hereditary or acquired.
- Congenital NDI
- sporadic NDI 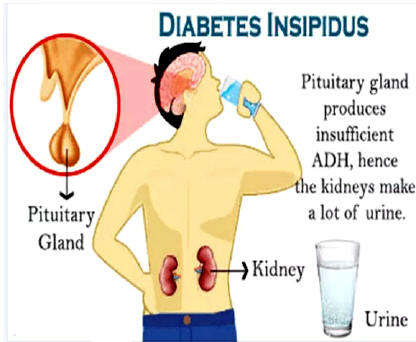 The causes are numerous and include:
- Drugs (especially lithium)
- Hypercalcemia
- Hypokalemia
- Conditions that alter medullary hypertonicity (eg, papillary necrosis or osmotic diuresis)
- Pregnancy: in the second or third trimester, it may develop as a result of the excessive processing of vasopressinase by the placenta

Often many causes can be excluded by:
- History
- Objective examination
- Relevant laboratory data

It means poor fluid intake. It may be due to a variety of pathological changes: • Granulomatous disease; • Vascular occlusion; • Tumors. More simply for a poor reflection of thirst, limited access to water (for example, boat passengers!); young children and those with physical disabilities and / or people with mental status changes; Other times these patients are patients with poor prescription of parenteral fluids (sic, where they did not consider 2000 ml / day of fluid and nutrient supply with the nutritional bags), or of patients postoperatively and / or patients intubated in therapy intensive. In all these conditions if the free water is missing, we will have a hypernatremia.

The diagnosis of hypernatremia is confirmed by a serum Na +> 145 mmo / l level. Full history and physical examination often provide clues to the root cause


Symptoms and signs relevant for diagnosis

Estimate the volume of extracellular fluid
If the volume of extracellular fluid is increased in patients with hypernatremia (as suggested by edema and distension of the neck veins:
• The most likely cause is the administration of a hypertonic solution of sodium chloride or sodium bicarbonate
If the volume of extracetlular fluid is normal or reduced:
• Check for a normal renal response to hypernatremia: excretion of a minimum volume (500 ml / day) of maximally concentrated urine (osmolality> 800 mOsmol / kg)
• Normal response: the most likely causes are an insensitive loss of water, a gastrointestinal loss, or previous renal loss
• Abnormal response: check the rate of osmolar excretion
-> 750 mOsmol / day: the most probable cause is diuresis induced by a diuretic or an osmotic agent
- <750 mOsmol / day: measure the renal response to desmopressin
• Increased urine osmolality: CDI
• Osmolality of the urine unchanged: NDI

• Dosage of serum Na +
• Hypernatremia:> 145 mmol / l
• Measurement of urine volume and osmolality
• Volume product for urine osmolality (ie, volume excretion rate)
- Useful for determining the basis of polyuria
- Osmotic diuresis: excretion of the solutes> 750 mOsmol / day
• It can be confirmed by measuring glucose and urea present in the urine
• Na + concentration in urine
• Natriuresi:> 100 mmol / l
• With the presence of an expansion of the extracellular fluid volume, the excess of Na + primitive is confirmed

Rehydration of the patient

Route of administration
Safer: by os or with a nasogastric tube (or another feeding tube)
• Alternatively, a 5% intravenous solution of dextrose in water or 50% isotonic saline solution

Rehydration speed
• It should be corrected slowly, over a period of 48 to 72 hours
• Losses should be taken into account
• The plasma concentration of Na + should be reduced by:
- 0.5 mmol / l per hour
- Not more than 12 mmol / l in the first 24 hours!

A quick fix is ​​potentially dangerous!
• A sudden drop in osmolality causes a rapid movement of water in cells that are subjected to an osmotic adaptation
• Can determine the increase in volume of brain cells, with increased risk of epileptic seizures or permanent neurological damage

It can be corrected by treating the underlying disorder or by eliminating the harmful drug S symptomatic polyuria
• Low Na + diet and thiazide diuretics
- Induce a slight volume depletion
- Determine an increase in proximal reabsorption of salt and water and a reduction in the release of the AVP to the site of action, the collecting duct
• NSAIDs
- Alterate renal synthesis of prostaglandins
- Enhance the action of the AVP and in this way increase the osmolality of the urine and reduce the urinary volume
• Amiloride
- May be useful in patients with lithium-induced NDI
- The nephrotoxicity of lithium requires that the drug be taken from the cells of the collecting duct via Na + channels sensitive to amiloride


Monitoring
Avoid a correction that is too fast and ensure that the values ​​are reached
Sodium target
During therapy, re-evaluate frequently:
• Contribution and loss of liquids
• Serum sodium
• Clinical status
Complications
Hypernatremia may result in reduced brain volume due to decreased intracellular fluid
• Reduction of brain cell volume associated with an increased risk of subarachnoid or intracerebral hemorrhage
• Prolonged or severe cases of hypernatremia cause permanent neurological damage or death
• Rapid overhydration to correct hypernatremia can lead to cerebral edema, causing neurological damage such as seizures, coma and death

Mortality rate
• It varies and depends on the root cause, on the severity of the condition and on the speed of the onset
• A rate of up to 45% is reported in all age groups
• Geriatric age can reach 79%
• In the event of death, it is difficult to distinguish the contribution of the hypnatremia from that of the underlying diseases

Prevention
Ensure adequate water supply to patients with hydrosaline balance disorders, the elderly and others who need assistance
Maintain adequate hydration in children with diarrhea
ICD-9-CM 276.0 Hyperosmolarity and / or hypernatremia

Hypernatremia's major danger stems from rapid rehydration, which can cause brain cells to swell. This can be avoided with a gradual approach, so that the concentration of Na + plasma decreases by no more than 0.5 mmol / l per hour