Explanation of the electrocardiogram (ECG) for non-physicians

5 minutes to understand an ECG (or almost!)

Preconditions.
After writing these things, I will not let myself be seen for a while by my prof.Peppino Oreto! 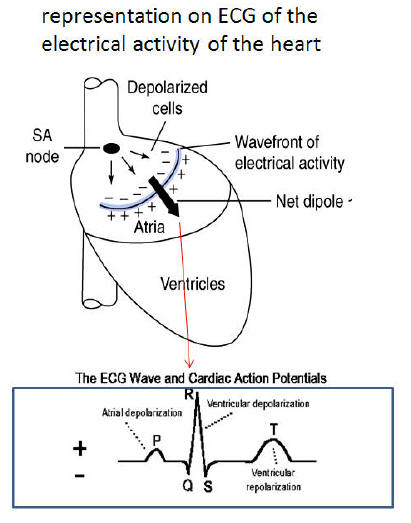 Each cardiac cell is equipped with electric charges, due to the presence of ions, inside K + and outside Na +; however, the presence of proteins with negative electrical charges in the cytoplasm determines an electronegative environment inside the cell; if we want to measure this potential with two electrodes between inside and outside the cell, the value will be -100 mV (rest potential). Following a stimulation, however, this electric potential changes and describing a characteristic profile passes to positive (depolarization); this phenomenon depends on the passage of Na + inside the cell and, subsequently, with the escape of K +, the cell returns to the value of the resting potential. However, a set of cells that are invested by this phenomenon generate a wave of depolarization, which can be represented as a dipole, arranged by convention with the positive sign forward, ie in the sense of the depolarization current and with the negative tail.

At this point, if we want to detect such a depolarization activity that involves the myocardium, on the ECG trace, it is represented by a positive deflection if the electrode that explores this dipole is placed in front, that is, if it "sees" such dipole approach him, if, on the other hand, the dipole moves away, it will be negative.


The repolarization phase, in which the cells, by effect of the membrane pumps, resume the electronegative charge inside, is represented as a wave of repolarization or recovery phase or T wave. In the final analysis a cardiac cycle is given by P wave of atrial electric activity, linked to the contraction of the atria, and a QRS complex, where Q must always be very small, R is the positive deflection and S the negative deflection, which constitute the activity of the ventricles; at this point a section S and T follows, and the wave T, then a pause; the ST segment is of considerable importance for the interpretation of the ECG, because it expresses the state of the coronary and oxygenation of the myocardium, understood as blood flow; in the case of an acute infarct, this trait is generally very overlapped with respect to the isoelectric line on which it normally lies, or, in the posterior infarcts, under-segmented on V1 and V2. Finally, it is recalled that a state of ventricular hypertrophy is accompanied by signs of overload, that is ST under-stratified and sometimes T negative with asymmetric branches with R in V5 and V6 of high voltage.

Positioning of the exploring electrodes 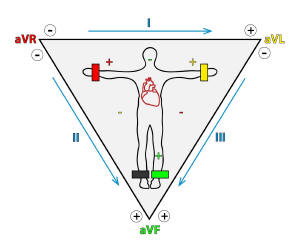 When an ECG is performed, the electrodes of the so-called peripheral leads and thoracic leads must be positioned on the patient.

What is the meaning of the exploring electrodes?


They have the task of studying the heart from different angles; for example, the thoracic ones go from V1 to V6 and better explore the right ventricle, the left, the septum etc., carefully locating any anomalies or waves of injury, ischemia and necrosis depending on the location of the same. The peripheral derivations help us in the localization of the cardiac axis, they are: aVL (ie increased Left Voltage with positive electrode in the left hand), aVR (with positive electrode in the right hand), aVF (F = foot, electrode in the left foot positive); the electrodes of the derivations D1, D2, and D3., that is of the derivations of the limbs, are:

ECG: Example of derivations D1-D2-D3
D1 with pole + on the left (if the electric axis of the heart dipole is to the left, as it is in the norm, therefore, in D1 the wave R will ALWAYS be positive because the depolarization is directed to the left, with positive deflection upwards !); in D2e D3 the positive pole is at the bottom. D2 + D3 + aVF have importance in the study of lower heart infarction or ischemia.

Rapid interpretation of the electrocardiogram or ECG.