Caratterizzata da: A) comportamento «fobico»; B) personalità di base: astenico-anancastica.

Phobia: it is the fear of a situation or an object (animated or inanimate) that is devoid of any intrinsic value of real danger. Phobia is a type of disorder that manifests itself with constant, recurrent and unreasonable fear towards an object, a situation, an animal, a specific event. Since the phobia occurs within a very specific context, in general, one is led to think that it is less invalidating than other types of problems. Being such a peculiar and specific disorder, however, it may happen that sometimes the person manages to avoid totally, to keep away from his daily life the phobic object, until, there is an opportunity, a situation, a change in the life of the person that leads to having to "deal" with the object of his own phobia. Phobic behavior therefore includes 3 elements:
1) the object (or the phobic or better phobogenic situation);
2) the non-rational fear of the subject, and criticized by them, of this object or situation;
3) avoidance behavior of the object or situation to defend against the aforementioned fear (counter-phobic measure).
The most frequent forms to be found in practice are: the phobia of open spaces (agoraphobia): the subject does not move away from a place considered safe, has difficulty crossing the road alone, can not remain alone in open places; the phobia of means of transport (dromophobia); the phobia of closed places and cramped spaces: crowds, crowded closed places, elevators (claustrophobia); the phobia of heights (acrophobia); phobia of approaching patients for fear of contagion (nosophobia); phobia of death with consequent avoidance behavior of objects, places, situations connected in some way to death (tanatophobia).

voidance is a psychic defense aimed at removing the individual from an anxiogenic stimulus through the simple mechanism of not coping with this stimulus. The consequence is an increase in the perception of danger of the avoided stimulus. This type of defense is, for cognitive psychology, at the base of phobias and the maintenance of dysfunctional beliefs (beliefs of dangerousness of objects or events). The more an individual avoids exposing himself to objects or situations that cause him fear, the more will be confirmed in him the belief that this object or situation is really dangerous. Exposure techniques (gradually exposing the individual in a conscious way to the dreaded stimulus) make it possible to considerably reduce the danger belief of the dreaded object.


At the base of the phobic neurosis there is a conflictual anguish which involves a painful and unbearable feeling of inter threat. which derives from the struggle between instinctual elements (thoughts, desires) incompatible with the system of values ​​of the subject and the defenses that the ego puts in place to keep repressed these drives. By transferring the threatening meaning to a datum external to the subject (that is, with the formation of a phobia) the ego realizes the "advantage" of moving the source of anguish from within, and of transforming it into fear, though irrational, of a concrete thing from which one can defend actively by avoiding it. It should be noted that in this "choice" of the phobic object often shines the quality of inner conflict: that is, the phobia has a symbolic value.


They are characterized by the fact that avoiding behavior of objects or situations takes on the aspect of avoidance compulsion for fear that an idea or a desire or an obsessive impulse can arise almost always with the value of aggression towards others and oneself (ex. obsessive phobia of weapons, knives and objects generally endowed with intrinsic damage). The French authors give this kind of phobias the name of phobia fidi impulse "to distinguish them from the" situation "phobias typical of phobic neurosis.
B) Basic personality
Alongside the typical characteristics of the asthenic personality, phobic subjects present characteristic elements of the "anancastic personality": a tendency to doubt, to control and to perseveratory iteration. 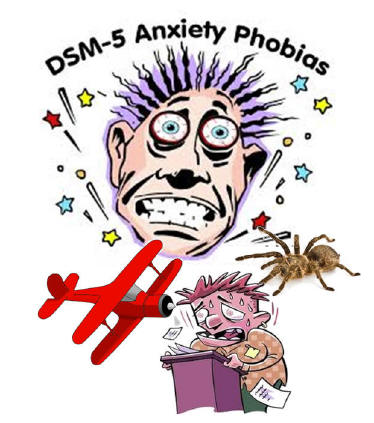 Phobic syndrome is so characteristic that the differential diagnosis offers no particular problems. Exceptions are some bizarre phobias of schizophrenics who can hide feelings of influence or represent the pseudo-neurotic outcome of delusions.

It is characterized by: 1) obsessive symptoms (obsession); 2) coactive behavior of obsessive symptom control; 3) basic personality («psychasthenics»).
1) Obsession (obsessive symptom): it is the sudden appearance in the field of consciousness of a content (idea, feeling, representation) of value and meaning generally unpleasant or in contrast with the personality of the subject, outside the will of the subject himself and that he experiences as a stranger to the normal course of his thought. This obsessive content is affirmed and imposed itself reappearing iteratively despite the efforts of the subject to get rid of it, to produce an inter-active coercion, a real psychic parasitism.
2) The experience of imposition and interactive coercion and the negative quality of the "obsession" provoke an affective reaction of the subject, which can go from discomfort and annoyance to serious conditions of anxiety with considerable moral suffering. From this unbearable situation a defensive elaboration proceeds which is expressed in a behavior of control of appearance and ritualistic flavor. This ceremonial soon became rigid, executed in a scrupulous manner. It can come to completely dominate the ideation and the whole life of the subject. Frequently encountered in practice are: meticulous and extremely long washing ceremonials for the obsessive idea of ​​dirt or contagion; ceremonials of repetition of gestures and / or phrases for propitiatory purposes, such as cabalistic formulas to combat obsessive, obscene and blasphemous ideas. S. Obsessive is the most serious of neurotic syndromes and the most resistant and rebellious to therapies. They are not infrequent in its long course of the intervening phases of the depressive type.
3) Basic personality: psychasthenics (obsessive-anancastic)
Psicasthenia is a term introduced in psychiatry by Janet who with it wanted to understand the presence in certain subjects of a lowering of the tone and level of superebral brain functions. Because of this «psychic asthenia» the subjects have particular characteristics:
a) "slowness" in the ideative and motor manifestations;
b) a tendency to doubt due to uncertainty and affective ambivalence in the face of situations of choice between two alternatives;
c) tendency to psychic elaboration, to inter-rumination. and to the control of acts and thoughts;
d) rationalization tendency made with meticulousness, fussiness; for marked feudism (perseveratory tendency);
e) rigid and controlled activity with a strict and orthodox moralism that regulates its existence.
Psychodynamic interpretation. The character traits of the obsessive should be understood as reactive formations (defensive models) against anxiety. They would control unacceptable impulses of a sexual and aggressive nature. The obsessive symptoms manifest themselves when the character defenses fall due to various causes (increases of instinctual drives, emotional traumas). The psychodynamic defense mechanism invoked in the pathogenesis of s. obsessive is basically the displacement (that is, the emotional cause is moved by the removed object on one of the verse) and various other mechanisms such as isolation and symbolization.
Differential diagnosis: 1) with the so-called "cold obsessions" of the pseudonevrotic forms of schizophrenia; 2) obsessive syndromes that appear as patoplastic aspects of personality in the case of reactive or more often endogenous depressions.

The most effective treatment for all types of neurosis is psychoanalysis or psychotherapy, sometimes hypnosis. Anxiolytics and antidepressants can be useful to reduce the disturbances and the phenomena of somatization of discomfort, considering that often the neuroses affect the social relationships, the sexual sphere and every other aspect of everyday life. The psychotherapeutic treatments are tailor-made, with the aim of establishing a relationship of empathy between the patient and the specialist