Anaerobic bacteria are microorganisms that do not require oxygen for growth and develop in CO2-rich soils. Microaerophilic bacteria can grow in an atmosphere containing 10% CO2. Non-spore-forming anaerobes are part of the normal bacterial flora of the mucous surfaces of humans and animals, being present mainly in the oral cavity, the gastrointestinal tract, the skin and the female genital tract. In oral cavity, the gram-negative bacteria species associated with bad breath are: 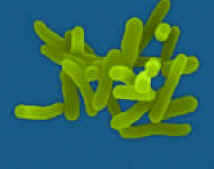 In the oral flora the anaerobes are predominant commensal microorganisms, varying in their concentration between 109 germs / ml in saliva and 1012 in the gingival plaque. These microorganisms grow better in the presence of only a small amount of atmospheric oxygen. Optional bacteria can grow in the presence and absence of air. This chapter describes infections caused by non-spore-forming anaerobic bacteria. In general, the pathogenic anaerobes for humans tolerate air relatively. In fact, although they can not multiply, they can survive for 72 hours in the presence of oxygen. A very small number of pathogenic anaerobes (which are also part of the normal endogenous flora), instead, die after brief contact with oxygen, even if in low concentration. In the oral cavity the ratio between the concentrations of the anaerobic bacteria and those of the aerobic bacteria ranges from 1: 1 on the surface of the teeth to 1000: 1 in the gingival pockets. The anaerobic bacteria are not detectable in appreciable number inside the intestine under normal conditions, if not starting from the distal ileum; in the colon the share of anaerobes increases significantly, as is the case with the total amount of bacteria. For example, in the colon there are 1011 to 1012 microorganisms / g of faeces, with an anaerobic / aerobic ratio of about 1000: 1. 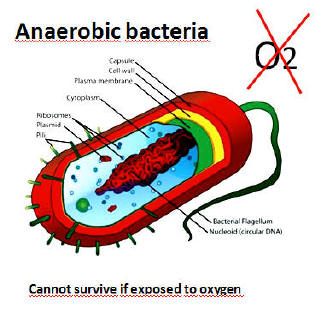 At the level of the female genital tract there are about 109 germs / ml of secretions, with the ratio already cited equal to about 10: 1. Hundreds of species of anaerobes have been identified as belonging to the normal bacterial flora of man. In faeces, the identification of at least 500 different species of anaerobes reflects the remarkable polymorphism of normal anaerobic flora and, despite this huge variety, relatively few species isolate themselves during human infections. Anaerobic infections occur when the balance between host and bacteria is altered. Each district of the organism can be the site of infection by these commensal germs, when the mucosal barriers or the skin are damaged by surgery, trauma, neoplasia, ischemia or necrosis, which locally reduce the redox potential. Because the districts colonized by the anaerobes contain numerous other bacterial species, a possible alteration of the anatomical barriers allows the penetration of many microorganisms, often giving rise to mixed infections with numerous species of anaerobes associated with optional or microaerophilic bacteria. Mixed infections of this type occur at the head and neck (chronic sinusitis, chronic average otitis, Ludwig's angina and periodontal abscesses). The cerebral abscess and the subdural empyema represent the most common anaerobic pathologies affecting the central nervous system. Anaerobes are also responsible for pleuropulmonary infections, such as aspiration pneumonia, necrotizing pneumonia, abscesses and empyema. Anaerobes play an important role in the genesis of various abdominal infections, including peritonitis, intra-abdominal abscesses and hepatic abscesses. These bacteria are then frequently isolated in infections of the female genital tract such as salpingitis, pelviperitonitis, tubal abscess, septic abortions and endometritis; finally, they are often found in infections of the skin, soft tissues, bones and in septicemia.

In humans, anaerobes represent the most common saprophyte flora. The wounds infected with anaerobes produce a characteristic acrid and rotting smell. Difficulties in carrying out adequate culture tests, the contamination of cultures by aerobic bacteria or components of the normal endogenous flora and the lack of reliable and immediately used cultivation techniques. make it impossible to obtain accurate assessments of the true incidence and prevalence of anaerobic infections. However, in hospitals with departments of surgery, traumatology and obstetrics-gynecology these types of infections are quite common. In some centers, the anaerobes, in particular B. fragilis, represent 8-10% of all bacteria isolated from blood cultures.

There are several types of anaerobic organisms.
Obligatory anaerobes are a group of organisms that are unable to survive in the presence of the usual atmospheric oxygen concentrations. Such anaerobes are not able to survive because they do not have enzymes like superoxide dismutase, catalase and peroxidase, able to protect them from oxidative stress generated by oxygen. The optional anaerobes, on the other hand, grow better in the presence of oxygen, but they also tolerate their absence. Microaerophilic organisms are able to use oxygen, but only at reduced concentrations (in the micromole range). Their growth is inhibited by normal oxygen concentrations (about 200 micromolar). Nanoaerobes are related organisms, which require concentrations of the order of nanomoles of oxygen in order to grow. Aerotolerant organisms do not require oxygen, they do not show any kind of metabolism able to use it, but they are able to survive if exposed to air, as they are endowed with the enzymes necessary to resist oxidative stresses. The main pathogenic anaerobic Gram-positive cocci are Peptostreptococcus species. The main species involved in infections are P. magnus, P. asaccharolyticus, P. anaerobius and P. prevotii. Clostridia are Gram-positive sporogenous bacilli that are isolated from wounds, abscesses, abdominal infections and during sepsis. The main Gram-negative anaerobic bacilli belong to the "family" of the Bacteroides, which includes the Bacteroides fragilis group, the fusobacteria, Prevotella and Porphyromonas. The Bacteroides fragilis group includes the most frequently isolated anaerobic pathogens in clinical infections; some members of the group are part of the normal intestinal bacterial flora and include different species, including B. fragilis, B. thetaiotaomicron, B. distasonis, B. vulgatus, B. uniformis and B. ovatus. Of these germs, B. fragilis is the most important from the clinical point of view, although in normal faecal flora it is less frequently isolated than other Bacteroides species. A second important group of phenotypically similar microorganisms is part of the normal oral flora and is represented by pigment-producing bacteria, previously classified as Bacteroides melaninagenicus and today known as Prevotella melaninogenica. The current taxonomy of this group has changed, so as to now include several species, such as Porphyromonas gingivalis, Porphyromonas asaccharolytica and P. melaninogenica itself. Ascolytic and pigment producing Porphyromonas species sometimes cause systemic infections in humans. In infections of the female genital tract Prevotella bivia and Prevotella disiens are the most often isolated bacteria, although B. fragilis is also common. Fusobacteria can also be isolated from foci of infection, including abscesses and necrotizing pneumonia. Bilophila wadsworthia is a Gram-negative, anaerobic bacterium, often resistant to various antibiotics, including imipenem, cefoxitin and other beta-lactams. This microorganism can cause serious infections such as bacteraemia, necrotizing fasciitis and abscesses. Infections caused by anaerobic bacteria are often polymicrobial, being able to be determined either by several species of anaerobic bacteria or by a combination of anaerobic and aerobic microorganisms, which act in synergy with each other.

All of these bacteria voraciously consume mouth debris containing proteins that, once digested, produces volatile sulfur compounds. These compounds are comprised of: