If you are suffering from rhinitis, if you have a stuffy nose, if you have secretions and you have difficulty breathing or coughing, go to the doctor right away to get the treatment for your case. This article is only a reading and does not replace your doctor. Rhinitis is a serious condition that must be treated well, now.

The diagnosis of seasonal allergic rhinitis depends to a large extent on the accuracy with which the anamnesis is conducted with regard to the frequency of rhinitis episodes coinciding with the pollination periods of the grasses, grasses or trees involved. The continuous nature of perennial allergic rhinitis from household contaminants or present in the workplace makes a correct anamnestic analysis difficult;

it can exist. however, some variability in symptoms that can be related to exposure to animals, allergens of house dust mites, insects or present in the workplace (eg, latex). Patients with perennial rhinitis generally develop the symptomatology during their adult life: the disease affects the female sex more frequently and is complicated by nasal polyposis and thickening of the paranasal sinus membranes, evident from the radiological investigation. The term vasomotor rhinitis designates a condition of increased reactivity at the nasopharynx, in which a set of symptoms similar to those of perennial allergic rhinitis occur following a nonspecific stimulus; in this condition an allergic basis can not be demonstrated. Other possibilities that must be considered in the differential diagnosis are the structural anomalies of the nasopharynx, the rhinitis from exposure to irritants, the infections of the upper respiratory tract, the pregnancy with problems of nasal mucosa edema and the prolonged use topically, underneath form of nasal drops, of drugs (a-adrenergics drug rhinitis), as well as the use of particular therapeutic substances such as reserpine, β-adrenergic antagonists or estrogens Nasal polyps can be present independently of a septal obstruction nasal on an allergic basis, especially in patients with sensitivity to non-steroidal anti-inflammatory drugs and in cases of rhinosinusitis or bronchial asthma.
The nasal secretions of allergic subjects are rich in eosinophils and a rather frequent feature is peripheral eosinophilia which is accentuated at the clinical exacerbations of the disease. The presence of local or systemic neutrophilia lays for an infection. Total serum IgE is often high, but demonstration of specific IgE is essential for etiologic diagnosis. 1 epicutaneous test (scratch or prick-test) with suspected allergens is a quick and reliable approach to identify the 1gE specific allergens that have sensitized the cutaneous mast cells. An additional intradermal test can be performed at a later time if diagnostic suspicions emerge on the basis of anamnestic data and the epicutaneous tests were negative; however, it is less reliable due to the fact that with this method also asymptomatic individuals may show reactivity at the dose-test. Epicutaneous tests with food allergens are controversial, but appear to have a predictive value for the absence of specific IgE; False positive results can be attributed to the histamine contained in the allergenic preparation, while false negatives may be caused by denaturing the relevant epitopes. 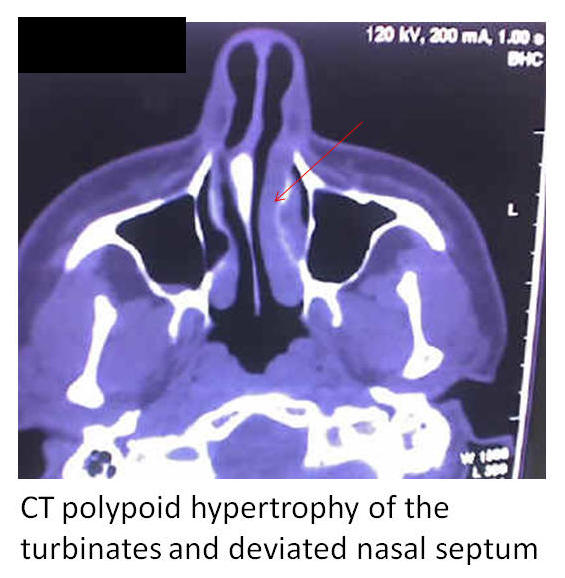 Double-blind stimulation with placebo administration may be useful for documenting a food allergy, but this procedure carries the risk of an anaphylactic reaction. An elimination diet is safer, but more annoying and less precise. Food allergy is rarely a significant cause of allergic rhinitis. The new methodologies for measuring total IgE, including enzyme immunoassays (ELISA) employing solid phase IgE antibodies or liquid phase paramagnetic antibodies, provide fast and efficient determination. For the treatment of patients, the titrations of specific IgE present in the serum are more important, which are carried out by testing the serum with a solid phase allergen and subsequently determining the quantity of 1gE adsorbed with radiolabeled anti-IgE antibodies. 1 results of this technique (radioallergosorbent technique, RAST) correlate satisfactorily with the results of the skin test, a method that is dependent on the function of mast cells in vivo, as well as those of the histamine release test from peripheral blood leukocytes in vitro, which is dependent on basophils. Compared to the skin test, RAST is less sensitive, which causes doubts in the evaluation of patients with ambiguous anamnesis. However, serological tests have a high specificity, with false positive results that are less relevant than false negatives. In addition, ELISA tests based on spectrophotometric or fluorescence techniques have replaced radioimmunoassay tests and the new chemiluminescent tracers provide a further possibility to dose even minimal amounts of allergen-specific IgE.

The most efficient tool for the control of allergic diseases is to avoid exposure to allergens or to incriminated allergens; it may be necessary to remove domestic animals from the house to prevent dandruff, the use of air conditioners or air filtration devices to minimize the concentration of pollens, the use of chemicals to eliminate the insect dandruff, careful preservation of food, transfer to climate zones during critical pollination periods, or even real home transfer to eliminate a mold spore problem. The control of dust mites can also be obtained by using synthetic material to isolate mattresses, pillows and quilts, eliminating carpets and curtains and taking care to reduce the humidity level of the rooms. 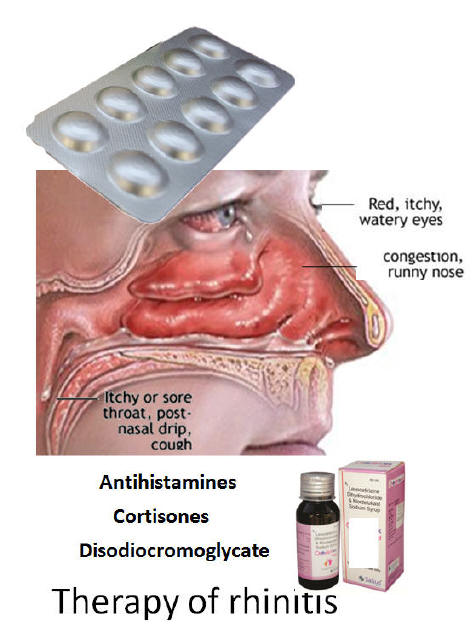 Drug therapy is the usual approach in case of seasonal or persistent allergic rhinitis. The antihistamine anti-H drugs, are effective in reducing the sense of pruritus in the nasopharynx, sneezing, rhinorrhea and ocular manifestations, such as pruritus, tearing and conjunctival hyperemia; these agents, however, have poor efficacy on nasal congestion. The first generation antihistamines have a sedative effect and their anticholinergic action (muscarinic) determines changes in the visus, urinary retention and sometimes the onset of arrhythmias. Due to the lower lipophilicity of the more recent anti-H1 antihistamines, the ability of drugs such as terfenadine or astemizole to overcome the blood-brain barrier is reduced, so the anticholinergic sedative effects become negligible. Anti-H1 antihistamines without sedative action, such as terfenadine or astemizole, may cause sometimes fatal ventricular arrhythmias when co-administered with macrolide antibiotics such as erythromycin or clarithromycin, or broad-spectrum antifungal agents of the ketoconazole family, which inhibit the metabolism of anti-H1 antihistamines; therefore, this type of pharmacological association must be avoided. In addition, non-sedating anti-H1 antihistamines should not be given to patients with concomitant diseases that alter hepatic metabolism or predispose to arrhythmias. The adrenergic drugs, such as phenylephrine or foximetazoline, are generally used topically to relieve the obstruction and nasal congestion; however, their effectiveness is limited, as the rhinitis tends to recur to the suspension of the drug; moreover, they can cause insomnia, irritability and hypertension, which however are more frequent if the drug is taken orally. Nevertheless, oral adrenergic drugs are useful as they enhance the effectiveness of antihistamines in controlling nasal congestion and may also decrease the sedative effect. The disodiocromoglicate, administered by nasal spray, is practically free of side effects and represents the only prophylactic remedy; therefore, it is used to attenuate sporadic activations of the nasal mast cells by allergens. In order to be effective, this drug must be administered continuously during exposure to seasonal allergens, usually 4 times a day or immediately before an occasional exposure to allergens (eg, prior to contact with animals). The clinical efficacy of disodiocromoglycate is almost equivalent to that of antihistamines without sedative action. Nasal steroids are the most powerful drugs currently available to control seasonal and perennial rhinitis, and often vasomotor rhinitis. Side effects are minimal, especially when compared to those caused by the same class of drugs administered orally. 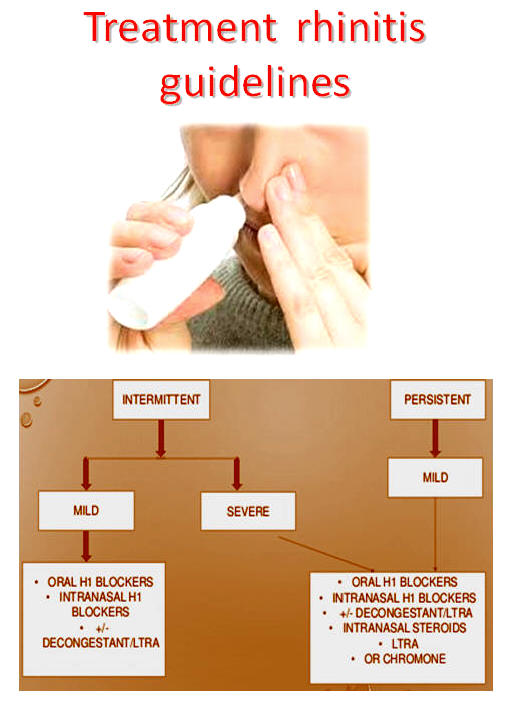 The most frequent side effect is local irritation of the mucosa, in which, although rarely, it can overlap a Candida infection. The local activity / systemic activity ratio of flunisolide and budesonide is much higher than beclometasone or triamcinolone, with minimal systemic absorption. During the pollen season, topical corticosteroid therapy is far more effective than that with only antihistamines, especially when there is high exposure to pollen. Therefore, if the patient does not derive adequate benefit from the full dosage of a last generation anti-H1 antihistamine, associated with maintenance doses of disodiocromoglycate and the use of an α1-adrenergic agent, the use of topical corticosteroids should be preferred. high efficacy. For the treatment of systemic symptoms, such as allergic conjunctivitis, therapy may be local or an oral antihistamine may be added. Immunotherapy, often referred to as hyposensitization, consists of a series of subcutaneous injections at gradually increasing concentrations of the allergen or allergens that are specifically responsible for triggering the symptoms. Controlled studies in a population of subjects treated for allergic rhinitis supported by allergy to ambrosia, grasses and dust mites have shown at least partial improvement of symptoms and signs. The duration of the immunotherapy goes from 3 to 5 years and can be interrupted if there are minimal manifestations for two consecutive seasons. The clinical benefits seem to be related to the administration of high doses of allergen on a weekly or biweekly basis. Patients should be observed for at least 20 minutes after administration of the allergen for help in case of anaphylaxis. Local reactions such as erythema and hardening of the injection site are not infrequent and may persist for 1-3 days. Immunotherapy is contraindicated in patients with severe cardiovascular disease or with unstable asthma; moreover, it should be used with particular caution in all patients treated with β-blockers, due to the difficulty of treating an anaphylactic reaction. The immunological characteristics of the response consist in a modest increase in specific IgE class antibodies in the early stages of treatment, followed by a plateau phase followed by a phase of progressive decrease in specific IgE with a decrease in the release of histamine by basophilic leucocytes. of peripheral blood stimulated with a fixed concentration of allergen. IgG class antibodies could significantly reduce or neutralize the amount of allergen available for interaction with the fixed mast cells; however, the most important mechanism seems to be linked to the synthesis of specific IgE. None of the individual parameters of response to immunotherapy correlate satisfactorily with the evaluation of clinical efficacy; therefore, the improvement is probably due to a complex series of events likely to include the reduction of cytokines by T cells.

Immunotherapy should be reserved only for clearly documented seasonal forms or perennial rhinitis, caused clinically by exposure to a known allergen. The nature of the triggering allergen must be confirmed by the response of 1gE allergen-specific. Furthermore, it must be documented that the symptoms of the patients are poorly controllable with attempts to remove from the allergens and with drug therapy for ineffectiveness of the drugs or for their side effects. An algorithm for the treatment of perennial or allergic rhinitis based on the specific identification of the allergen and on subsequent phases aimed at controlling the symptoms should include the following points: 1) identification of the allergen or pathogenic allergens with anamnestic examination and confirmation of the presence of IgE allergen-specific through skin tests c / o serological tests; 2) decrease in allergen exposure; 3) for mild symptoms, prophylactic treatment with administration of disodiocromoglicate or with a single dose of chlorpheniramine before bedtime; if this drug is associated with significant side effects, it can be replaced with astemizole or with terfenadine, in the absence of contraindic actions due to concomitant therapies or diseases; 4) for the most pronounced symptoms, topical use of beclometasone, which can be replaced with budesonide or flunisonide as needed up to the control of symptoms; 5) immunotherapeutic treatment in the forms refractory to the pharmacological treatment and to the removal from the allergen.