Palpation of the intestine

Normally, the loops of the intestine escaped the palpation, giving the hand that palpates only a feeling of slight elastic resistance. The large intestine, on the other hand, can be physiologically appreciable, mostly at the level of the cecum, the transverse, the descending and the sigma, in the left iliac fossa, where it is especially appreciable in the form of a hard-elastic cord. size of a small sausage, which escapes under the fingers and is often very painful to medium-deep palpation (sign of the "colonic rope", see irritable bowel syndrome); this finding, which is given by the contracted colon, is more easily found in the vagotonic subjects with spastic constipation. At the level of the sigma, if this contains some insulated spacers, the bowel takes on a rosary appearance.

Palpation of the intestine 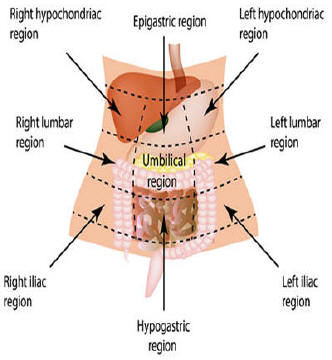 In pathological conditions, a loop of the small intestine or a section of the colon can be palpably appreciated by thickening of the wall of the intestine (cf. inflammatory bowel diseases or colon neoplasm or abdominal masses) or by a segmental spasm, mostly on an organic basis ( ulcerations, colonic stenosis or scarring bridging, etc.). Furthermore, an abdominal mass can quickly be formed by:

- invagination or intusussception: an intestinal loop flows and introduces itself into a successive tract and is appreciated as swelling, which looks like a sausage, of hard-elastic consistency, is enlarged and hardens during painful paroxysms; mostly located in the left or right iliac fossa, which is accompanied by vomiting, presence of mucus and blood in the stool;

- volvulus: for example, in case of mobile sigma a painful mass will be localized to the left iliac fossa, it consists in a withdrawal on itself of the loop which, as it were, twists on itself. These are obviously surgical emergencies (acute acute surgery). In fact both conditions are accompanied by the symptomatology of the mechanical ileum.

The neoplastic masses of the intestine do not generally reach conspicuous dimensions, as they precociously become responsible for sub-occlusive or occlusive phenomena: violent, accessory and intermittent pains, with borborigmi, almost closed alve (subocclusion) or closed (occlusion) in stool and gas, meteorism. In the occlusion of the last stretch of the tenuous and the blind, meteorism is in the center, in those of the sigma meteorism is a lateral frame, due to dilatation of the colon. 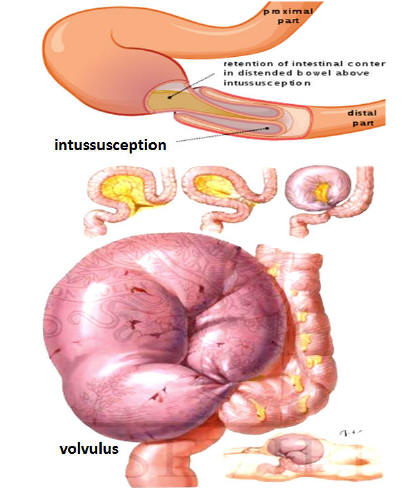 Above all the tumors of the small intestine are endowed with great passive displacement. The most frequent site of colon neoplasm is sigma, then the transverse, the cecal, the descendant. The tumors of the cecum must be differentiated from the tuberculoma, in which the bowel mostly retains its shape and the swelling does not appear well circumscribed, but continues in the surrounding parts. Sigmoid tumors should be differentiated from sigmoiditis and chronic perisigmoiditis (see inflammatory intestinal diseases) of hyperplastic character, from diverticulitis; the palpatory finding of painful tumefaction and the bad delimitation lays more for diverticulitis than for the tumor. Diverticulitis is accompanied by pain, constipation or mucoid-bloody diarrhea, subocclusion or occlusion, fever, weight loss and increased ESR; differentiation with other processes must be done with radiological examination and above all with lacolonscopy and completed by the biopsy study.

When a palpable tumefaction of the colon is found, consideration should be given to whether it is a faecal tumor (fecaloma): faecal mass, which can reach considerable volume, indolent, with a smooth or bernoccoluta surface, of varying consistency, hard, elastic or pasty, that is, moldable with the fingers (in this last case it is easier to recognize its nature); stagnating in the colon, it dehydrates and gradually increases in consistency. The fecaloma is mostly appreciated at the level of the distal portion of the colon or of the right flexure of the colon, with little possibility of spontaneous elimination; usually these patients suffer from chronic constipation and the finding disappears after administration of a purgative or after enteroclism. The term "phantom tumors" refers to all intra-abdominal swelling that disappear and are no longer evident in subsequent examinations: for fecalomas or for circumscribed spasms.  cf >>  palpazione delle porte erniarie index of gastroenterology